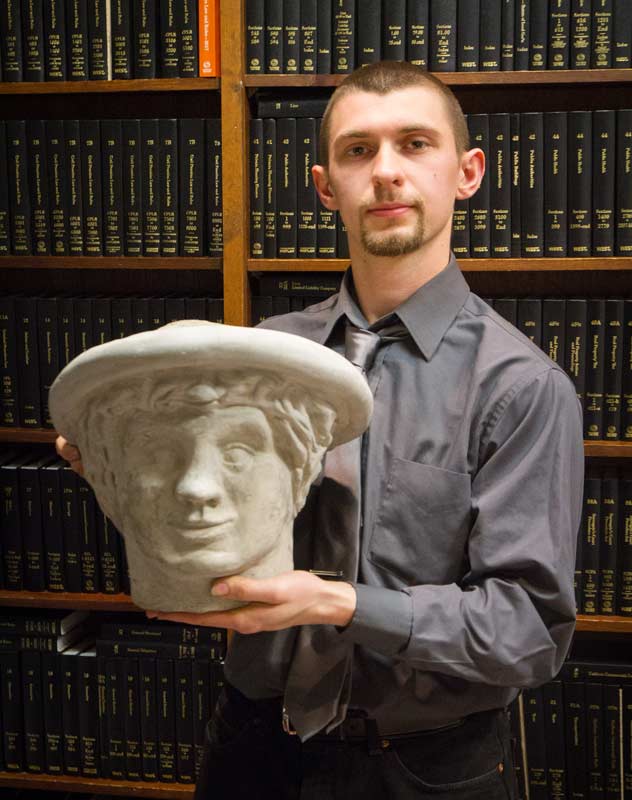 It was upon entering the Ellicott Square Building that Alphonso Butlak, IV noticed one of the angels guarding the revolving doors was missing its head. And, it was right then and there that the part-time Dollar General Store clerk, from Angola, NY, made an instant decision that changed the direction of his life. He took it upon himself to reconstruct that statue head. He scheduled a quick meeting with Ellicott Development, the owners of the building, in the hopes they would allow him to do the work. That was during the November storm in 2014. In 2018, he finished the angel’s head.

When asked how long it took to make the statue, Butlak laughed saying “3 weeks & 3 years”. His first two attempts at recreating the angel ended up breaking after they were completed. The successful creation, costing only $5, is designed using cement and barbed wire. Yet, what’s most impressive is this is the first statue Butlak has ever made.

Alphonso Butlak, IV comes from a family rich in generations of Ironworkers; a tradition he intends to carry on. He recently purchased a store in Farnham, New York on Commercial Street & Railroad Avenue. His store will feature iron products & art and eventually the lot will be filled with statues created by Butlak, himself.