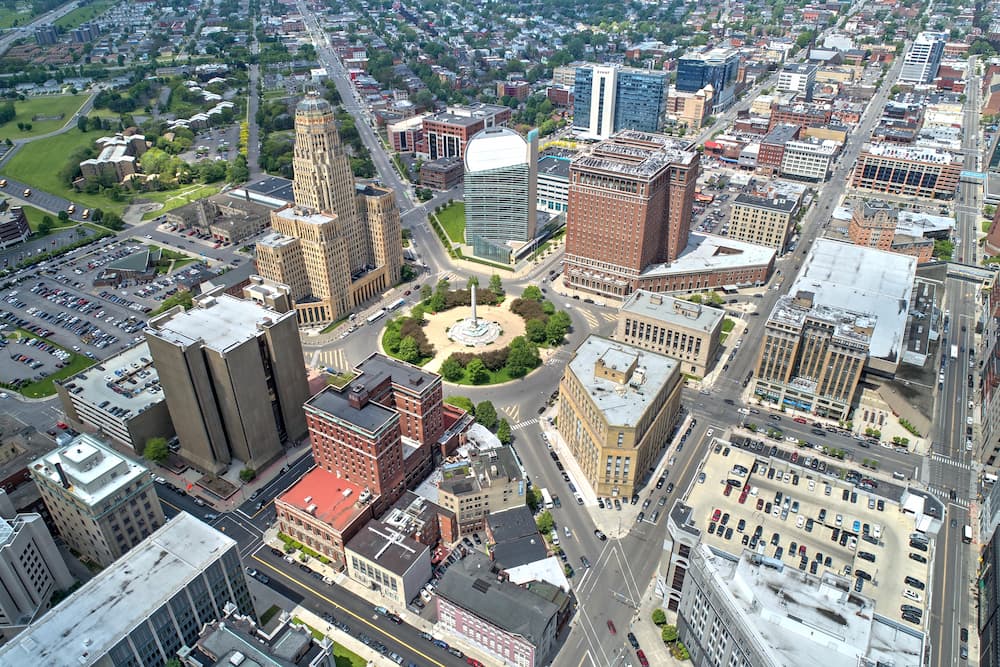 Buffalo has a lot to offer for everyone, including an impressive collection of local breweries and brewpubs. We’ve assembled a list of these top breweries in Buffalo, NY. We’re mostly focusing on the downtown area, where there are so many options — you may not be able to decide where to go first.

Big Ditch Brewing Company is known for many things — its New Year’s Eve party, for one. But Big Ditch’s biggest draw is its huge range of craft beers. As a Beer Craft Brewery Award winner at TAP New York, this Huron Street brewpub creates beers inspired by the Erie Canal and iconic history.

You’ll want to try some favorites when you visit. There’s the Low Bridge golden ale and the Excavator, a rye-based brown ale. Another top brew is the Hayburner, one of the pub’s award-winning IPAs. The Big Ditch boasts a two-level taproom plus a restaurant and a laidback, casual atmosphere.

Situated on 7th Avenue, Community Beer Works is one of the first local breweries to spearhead the brewpub renaissance in Buffalo. While it started with a 1.5-barrel brewhouse, Community Beer Works now has two locations and produces a large selection of top-quality brews — its Frank citrus-flavored pale ale and the Whale brown ale, to name a few. Community Beer Works also regularly puts out limited-release small-batch varieties like its Peach Cobbler Pilsner and its Recklessly Optimistic, a Frank Zappa-inspired lager-style brew.

Thin Man Brewery started in 2016 when it opened its Elmwood Avenue location. It benefits from industry expertise and an impressive pedigree, with former Blue Monk owner Mike Shatzel as one of the company’s four partners. Thin Man has become known for its distinctive brews. Trial by Wombat is a New England/Hazy IPA with a decidedly fruity and citrusy profile. The Thin Man has also collaborated with other notable local establishments such as Aslin, 3 Sons, and Pure Project. It now has three locations: Elmwood Avenue, Chandler Street, and Transit Road.

Located in Larkinville, Buffalo Brewing Company is a family-owned and -operated brewery focusing chiefly on lagers, pilsners, and porters. Small yet mighty, Buffalo produces an impressive line of brews: 1910 Czech Pilsner and 1841 Irish Red Ale, plus the Sour traditional Gose Explorer No. 7. There’s much more in its growing collection, including its New England/Hazy 1896 NEIPA boasting light citrusy notes.

Resurgence Brewing Company began in 2014 inside an old warehouse on the West Side of Buffalo. Now, it’s one of the top breweries in the city. Founder Jeff Ware has made the most of the original space, with skylights and garage doors that make the interior open, airy, and inviting. But what’s even more awesome is its selection of brews like Cosmic Truth, a Mosaic hopped session ale enhanced by tropical fruit flavors. You may also love its Sour Candy Stout’s caramel and toffee flavors, or its Greenheart NEIPA’s hoppy profile with pineapple, lemon, and peach. There’s even the Peanut Butter Porter, a brew with chocolate malt and peanut butter aromatics.

In 2019 they opened their state-of-the-art brewery & taproom located at 55 Chicago St. in Buffalo, NY. This new facility allows you to experience the brewing process in an up-close setting and includes a larger production facility, full restaurant, and banquet center.

Parked right on Military Street, Froth Brewery has lots to recommend it. A quick look at its menu reveals a large range of brews. There’s Pastry Works, an Imperial/Double Pastry Stout with peanut butter, vanilla bean, marshmallow, and coffee flavors. Mad Science is an Imperial/Double IPA with a distinct hazy flavor profile enhanced by pineapple, stone fruit, and mango. Its menu also features hard seltzers and sours with fruit and creamy flavors. Froth also boasts a kitchen with its taproom, with delicious pub fare perfect for pairing with its fantastic brews.

Belt Line Brewery’s tagline is “Buffalo Brewed Beer.” And with a broad selection of brews both on tap and to go, that’s more than just a clever slogan. Honey Kolsch is a German-style farm-to-tap beer featuring locally produced honey. Other favorites include Flock of Flamingos, which is a fruited sour with blood orange, tangerine, and pomegranate, and the First Loop NEIPA that blends Mosaic, Citra, and El Dorado hops.

Belt Line offers craft beer four-packs to go, plus an amazing collection of small bites, salads, burgers, and other delectable fare to pair with your favorite brews. Its menu features everything from its charcuterie board to the Texan, a monster of a burger with two beef patties plus bacon, cheddar, blue cheese, and hickory barbeque sauce. There’s plenty for vegan and vegetarian craft beer lovers with Belt Line’s Beyond Burger, Vegan Chicago Dog, and Vegan Italian Dog.

Southern Tier Brewery boasts several locations throughout the Great Lakes region: Lakewood, Pittsburgh, and Cleveland, plus one further south in Charlotte. As part of Southern Tier Distillery, the company operates breweries and pubs serving classic fare like pulled pork tacos and grilled veggie paninis. At the Lakewood location, you’ll find everything from its Honey Ginger Hard Cider and New Haze IPA to Pumking, its standout pumpkin and yam beer.

Ellicot Development is a full-service real estate management firm with a wide range of apartments, condominiums, and townhomes throughout the region. Ready to call Buffalo home? Check out our listings or reach out to us through our convenient contact form.