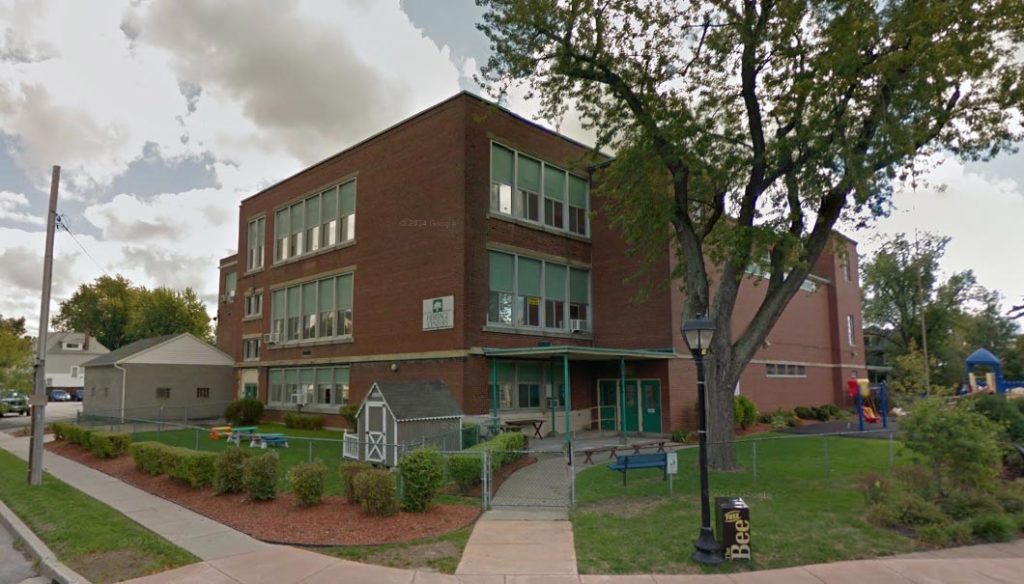 Via Tonawanda-News
By Amy Wallace

KENMORE — The Village Board put some of the finishing touches on a planned redevelopment of the former school building at 1 Delaware Road at its meeting Tuesday.

The board unanimously approved a certificate of appropriateness for the property that was purchased last year by developer Carl Paladino’s Ellicott Development Co., which was the former site of the Heritage Center and current location of Creative Child Daycare Center.

The building, the former George Washington Elementary School, was built in 1911 and is located at the intersection of Delaware Road and Delaware Avenue in the Village of Kenmore, adjacent to the village gazebo.

“The building was once designated with historical status in the ‘70s,” Mayor Patrick Mang said, explaining that it was only a local designation. “But that status was taken away when previous work was done on the building.”

According to Kenmore Clerk-Treasurer Kathleen Johnson, the resolution the board approved Tuesday means that a review had been done and no adverse effects were found to occur when the redevelopment moves forward.

“The project is the first to apply under the village’s new planned unit development, in which the Village Board is given discretion to fit zoning to the community’s needs,” Johnson said. “The building was previously zoned residential, which still applied even when it was a school. But now with retail space planned, it had to be rezoned.”

Plans by Ellicott Development Co., owned by Paladino and his brother, William, call for the building to be redeveloped into 20 one- and two-bedroom apartments along with a 5,500-square-foot addition facing Delaware Avenue for offices, retail and restaurants.

At least 87 parking spaces are planned in the lot behind the building.

According to Johnson, Heritage Center moved out about a year ago and Creative Child is the only tenant occupying the building currently. The daycare would remain on site and be given its own entrance, according to the plans.

Ellicott Development Co., was planning on starting construction on Nov. 1 but has yet to acquire the proper permits, according to Kenmore Building Inspector Michael Berns.

“They’ve gone through all the processes but may be holding off the start (of construction) to figure out how to keep the daycare center open during the work,” Berns said.