Article via The Buffalo News
By Jonathan Epstein

Ellicott Development Co. wants to bring a touch of modernity to the former Our Lady of Lourdes Church.

The development firm, which owns the church and much of the nearby property, has planned a six-story, retail and office building on Main Street that will connect directly to the church via a glass-enclosed atrium.

The $35 million project planned for a surface parking lot just south of the church will feature a blend of colors and materials designed to tie it into Our Lady of Lourdes, while aiming for “an edgy, modern exterior” consistent with newer development down the street, according to a letter from Ellicott Director of Development Thomas Fox to the city Planning Board. 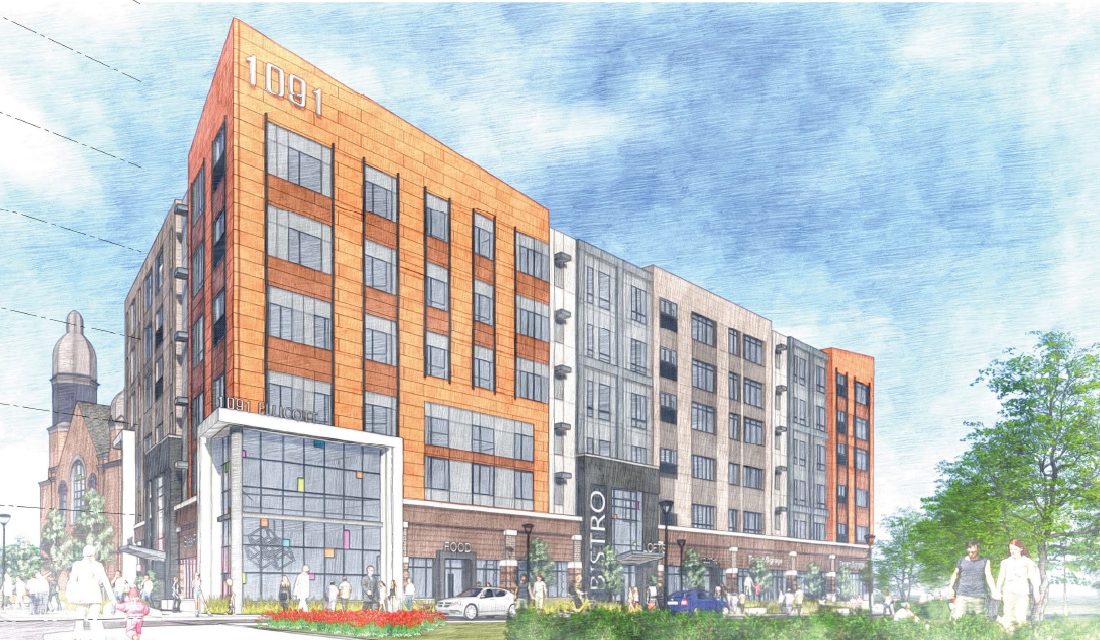 “This is a project we’ve been working on for several years,” Fox told the Planning Board. “We’re very much excited to present our vision.”


The board unanimously approved the project Monday night.

The developer also received a variance from the Zoning Board of Appeals. With Monday’s approval, Ellicott Development hopes to start work by early summer and finish within 12 to 18 months, by late 2018. Fox said the company has some tenants lined up, but did not disclose them.

Ellicott Development officials view the new building as the first phase in redeveloping not only the church, built in 1898, but a larger group of properties that Ellicott has amassed in recent years in the area near St. Paul and Main streets.

The proposed 194,000-square-foot building, located at 1091 Main, is intended to capitalize on its proximity to the Buffalo Niagara Medical Campus just a couple of blocks to the south. Designed by Smith & Associates, it will include a combination of retail and office space on the first floor, with the five upper floors of medical or other office space.

The 87-foot-tall building will also include a basement level for parking 50 vehicles, as well as a loading dock. The grade of the land drops significantly from west to east, allowing the developer to add an access ramp at the northeast corner to allow cars to get into the garage with minimal impact on the building’s design.

The developer will also use some adjacent properties as overflow surface parking until it develops those sites. Fox said the firm is still working with the city to acquire additional parcels to the east and southeast.

The building will be constructed from a mix of materials to break up the facade. They include rusticated brick piers at the base to match the church building, as well as terra cotta-colored and gray cement panels, metal panels and glass for the atrium, storefronts, corner and entrances. It will have a tapered parapet on top.

The glass-enclosed atrium connecting the new building and the church will be a two-story “winter garden” courtyard. It will incorporate the exposed south wall of the church inside the glass.

Meanwhile, plans for the church – which Ellicott has owned for several years – are still evolving. The developer has been criticized by some for allowing the building to deteriorate since it acquired it seven years ago. But Fox said the former owner “stripped it to the bones on the inside.” The developer has been concentrating on stabilizing it and making structural repairs while working on a long-term plan.

Fox said officials are exploring different options and uses for the church space, but expect to build two new floors, plus the existing floor, for a total of 14,000 square feet of space. He said the developer will likely come back to the Planning Board with those plans sometime in the next two to three months, but added that it will “primarily” retain its appearance as a church.