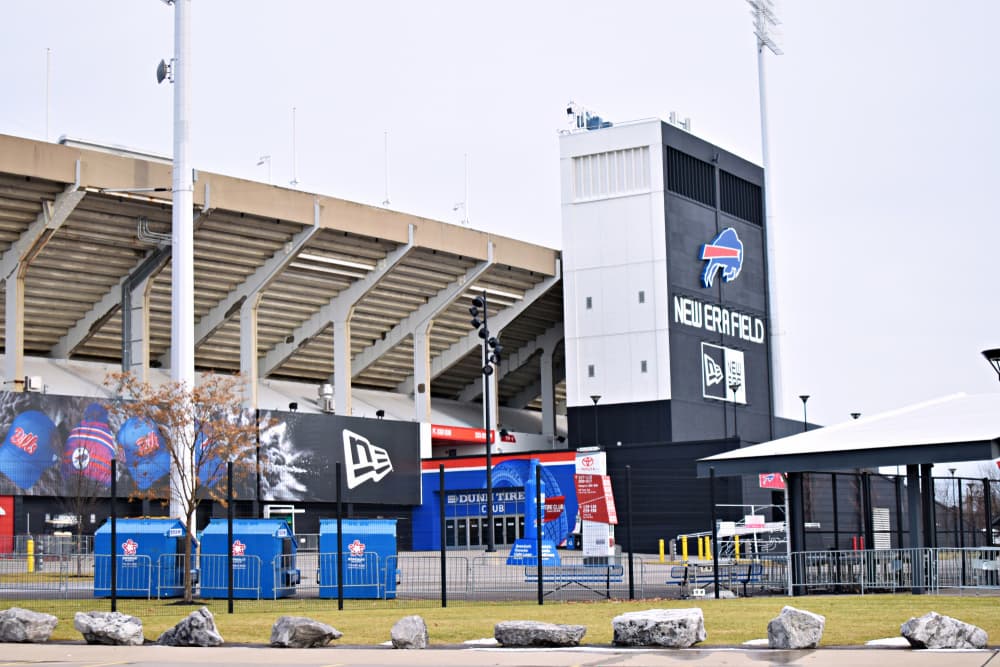 As you read this article, you’ll learn about the best Buffalo Bills players and whether they’re inducted into the Pro Football Hall of Fame:

Residents of Buffalo, NY, adore their home team, the Bills, and the admiration is well-deserved. This team has seen dozens of Hall of Fame players and boasts dozens more who deserve to be inducted.

There’s no greater honor for a professional football player than induction into the Hall of Fame. Inductees are celebrated for the skill, dedication, and teamwork that made their careers phenomenal. Here, we review some of the best-known Hall of Famers from the Buffalo Bills.

For six years, Joe Delamielleure was an offensive lineman with the Buffalo Bills. He ranked number one in the NFL in 1973 for the following:

Elbert “Golden Wheels” Dubenion was with the Buffalo Bills for nine years. He held the position of wide receiver and set the record for the longest reception at 93 yards.

Jim Kelly was with the Buffalo Bills for 11 years as a quarterback. That includes four consecutive Super Bowl games, where his scoring skills were on full display. His number has been retired by the Bills, and his induction into the Hall of Fame occurred in 2002.

In 2001, Marv Levy took his place in the Pro Football Hall of Fame after 17 years as a head coach. He was the head coach for the Buffalo Bills for 11 years, including their four trips to the Super Bowl.

Terrell “T.O.” Owens was a wide receiver with the Buffalo Bills for a year. During his time on the team, he reached a career milestone: 1,000 receptions. He earned his spot in the Pro Football Hall of Fame in 2018.

Inducted in 2014, Andre Reed played for the Bills for 15 years. In that time, he clocked 951 receptions, making him one of the best wide receivers in the NFL.

OJ. “The Juice” Simpson was a running back with the Buffalo Bills for eight years. He achieved a 143.1 single-season yards-per-game average during his career, which still stands as an NFL record. Simpson is now a controversial figure due to his very public trial for the murder of Nicole Brown Simpson and Ron Goldman, for which he was ultimately acquitted.

In 2009, Bruce Smith took his place in the Pro Football Hall of Fame. He played in the Super Bowl four consecutive times while with the Buffalo Bills and was inducted the first year he was eligible.

Darryl Talley was a linebacker for the Buffalo Bills for 11 years. He went to the Super Bowl four consecutive times and has a career total of 484 tackles.

Thurman Thomas was with the Bills during their four consecutive trips to the Super Bowl; he spent 12 years on the team overall. In 1991, he was named NFL MVP, and in 2007, he joined the Hall of Fame.

Hall of Fame induction is a long process, and not every deserving football player makes the cut. However, they should still be acknowledged for their hard work, which is why we’ve created this list of Buffalo Bills players who deserve a spot in the Hall.

During his six years with the Buffalo Bills, Shane Conlan made three Pro Bowl games. His high energy as a linebacker made him a fan favorite.

A defensive tackle with the Bills, Marcell Dareus was in two Pro Bowls. His 292 tackles are impressive and make him a worthy addition to this list.

Lee Evans set several records during his eight years with the Buffalo Bills:

Robert James was undrafted and played with the Buffalo Bills for six years. In that time, he got a First Team All-Pro spot twice and made it to the Pro Bowl three times.

Despite only spending three years on the team, Bryce Paup made a name for himself with the Buffalo Bills. He was named AP Defensive Player of the Year and made the Pro Bowl three times.

John Tracey spent five years with the Buffalo Bills. In that time, he was twice named an AFL All-star.

As of 2020, Tre’Davious White has been to two Pro Bowls. In 2019, he had the most interceptions of the NFL and secured a First Team All-Pro Selection. He earned All-Rookie honors when he first joined the Bills in 2017.

Mario Williams played for the Buffalo Bills for four years. In 2012 and 2013, he made it to the Pro Bowl and earned the First Team All-Pros the second year.

If you’re a football fan thinking about visiting Buffalo, NY, you should consider Buffalo Bills vacations. Ellicott Hotels is the Official Hotel Partner of the Buffalo Bills and you’re going to want to visit their property in Downtown Buffalo which happen to be the hottest spot in Buffalo, NY. You can spend the night and enjoy the “In Good Company” package. Book your stay: https://500pearlbuffalo.com/in-good-company/

Of course, when you come to Buffalo, NY, you’ll need a hotel to stay. That’s where Ellicott Development comes in. We own and manage a wide range of hotels, ensuring you find the perfect spot to relax and recuperate. For more information or to book your room, give us a call at 716-854-0060 or visit our website.