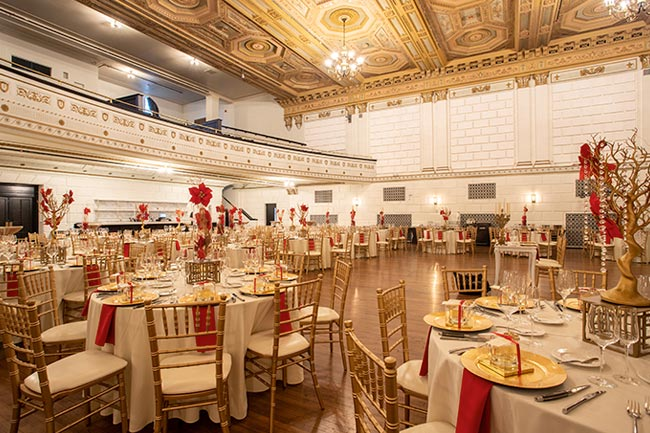 There’s a reason people dress up to go to the ballet or the orchestra or a Broadway musical.

Whether you’re watching a movie, a play or a live performance, being in nicer attire gives the entire event an additional layer of glamour and enjoyment.

The same goes for the atmosphere of the event venue. It’s definitely more enjoyable to attend a concert in a rocking venue than it is to watch it at home on your TV, isn’t it?

When it comes to live performance venues, Buffalo offers several distinguished locations where you can enjoy the arts in style. Keep reading to learn more about a few of our favorites.
Forbes Theatre

The event space has been meticulously restored to 1920s opulence and style. Guests will be awestruck by the space and will immediately be put into an artistic and appreciative frame of mind, just upon glancing at their surroundings.

The location is perfect for staging an event centered around the arts. The theatre room has a stage area and a giant screen, perfect for showcasing dancing, multimedia or other performance types.

And, with its spaciousness and its connection to 500 Pearl for catering and event management, it’s also a wonderful location for putting together a gala or other fundraising event to support the arts in Buffalo.
Kleinhans Music Hall
You probably know that Buffalo is home to a host of famed musicians, including the Goo Goo Dolls and Brian McKnight. However, Buffalo’s dedication to music and the arts extends much farther into history.

Kleinhans Music Hall is the seat of Buffalo’s devotion to the arts. This building, while not particularly physically imposing, is a one of the world’s most acoustically perfect music halls.

It was built in the 1930s following the wishes of a local philanthropist and can seat almost 3,000 attendees. Today, it’s home to the Buffalo Philharmonic Orchestra.

Feeling intimidated after hearing all the glories of this local concert venue? Don’t be. While Kleinhans is an iconic location, the music hall hosts a number of events each year that are intended to introduce novice listeners to the beauty and accessibility of good music.
North Park Theatre
Theatre snobs may turn up their noses at attending a movie over a play. However, they’ve probably never enjoyed a movie at Buffalo’s North Park Theatre.

Like many Buffalo historical landmarks, the North Park Theatre was designed in the 1920s Art Nouveau style. And, fortunately for architecture lovers, the space has been lovingly restored to its former Roaring 20s glory.

The theatre’s original developer believed that entering a movie theatre should capture filmgoers’ imaginations and get them feeling elevated and inspired before they immerse themselves in their film of choice.

As such, the theatre is decorated with mythologically inspired murals, elaborate stained glass windows and more. And, almost 100 years after its development, it’s still a great place to get lost in a good story.
Delaware Park
If you’re looking for a different, but no less iconic, performance experience, Delaware Park in the summer might just fit your needs.

The park typically hosts Shakespeare in Delaware Park, where avid fans can enjoy beauty, fresh air and delightful drama (or comedy, depending on which type of play the company is performing).

Watching a play outdoors is certainly an iconic experience because of the way your senses are enlivened by the fresh air, the novel setting and the relaxed atmosphere.
Shea’s Buffalo Theatre
The hydroelectric boom in Buffalo left a monumental legacy, and “moving pictures shows” were definitely a large part of it. Shea’s Buffalo Theatre was, like several of the other theatres in the city, built in the 1920s.

And, while the restored interior is a feast for the eyes, hungry guests can more prosaically enjoy a feast as well. Shea’s Bistro and Bar onsite offers a wide variety of food and beverages to accompany the fantastic performances.
Albright-Knox Museum
Looking for another great choice to enjoy the arts? How about enjoying the arts while enjoying the art of the Albright-Knox Museum?

The museum itself is a jewel box that holds works by more famed and acclaimed artists than you can see and enjoy in a single day. You’ll see pieces by well-known creators like Edgar Degas, Claude Monet, and Vincent van Gogh, as well as a host of other inspiring and thought-provoking pieces by other artists.

And, many of the performances hosted onsite are artistic, interactive and family-friendly. Events and programs like Art Alive (where people recreate their favorite works of art on the museum lawn) or multi-sensory workshops allow attendees to be swept up in the action, creativity and fun.

Buffalo is an iconic city, one whose legacy continues to grow. It’s no wonder the community is filled with beautiful, memorable locations where guests and locals alike can enjoy all it has to offer.